Sydney is an amazing city, very spacious, lots of trees and many of wonderful beaches. I was very lucky to stay on Bondi beach with Sam and Taran. Jt was in Scotland. The view from the balcony is so beautiful. 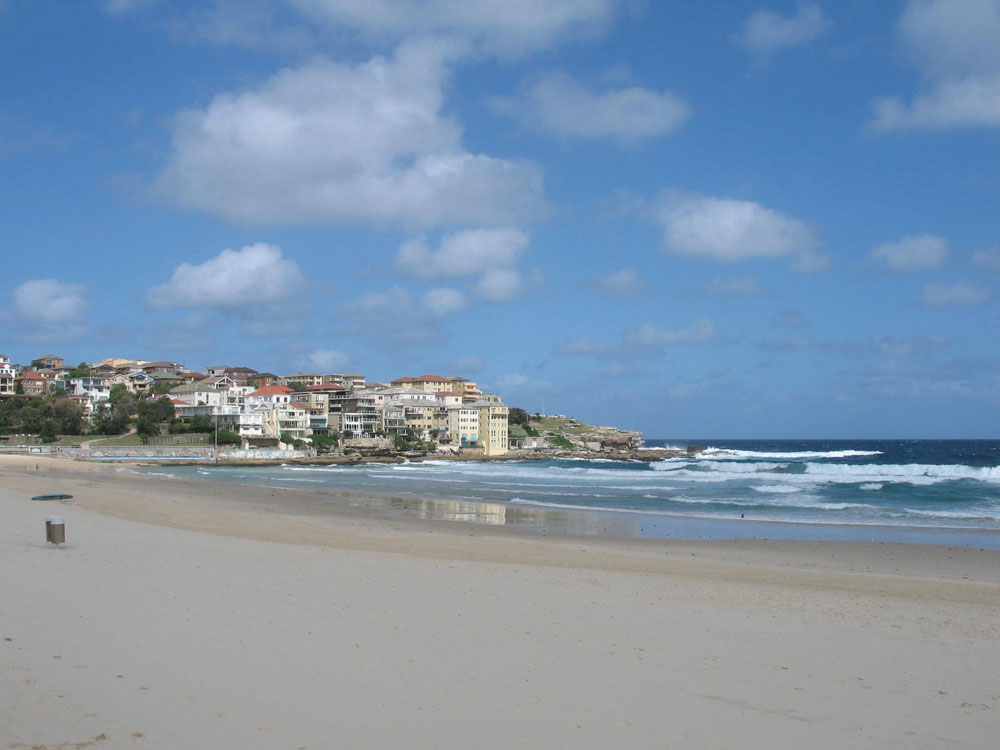 After two weeks I moved to Fairfield with friends from Fiji. It was good to experience of suburbian life as well! Bit different from Bondi beach!

Sydney Harbour is commonly referred to as the most beautiful natural harbour in the world. Those who come to see it will understand why. The 240 kilometres of shoreline encompass approximately 54 square kilometres of water, which translates to an enormous area for exploration and discovery. Although there are exclusive homes dotted around the water's edge, there are large tracts of parklands, reserves and gardens that balance the harbour environmentally. It is possible to walk around much of the harbour edge and picnic in many spots.

On a warm sunny day, the harbour is a vibrant blue and dotted with hundreds of sailing boats, cruise boats and ferries.
The Blue Mountains is place of great natural beauty and rich cultural resources. I visted it for a day with Anjali and Mario. We also took the Ferry to Manley beach. Unfortunate is was raining.

I was very lucky as Sian, Sam's mum lend me her car for a few days.

Huskisson, gateway to Jervis Bay is just two and a half hours from Sydney and Canberra. It is a lovely village on Jervis Bay with beautiful, white beaches. On the way there I was surprised by the worst hailstorm I ever encountered. I stiopped the car under a tree. The noice was deafening and the hailstones over 0.5 cm big!

I spend most of my time in Booderee National Park. Booderee is an Aboriginal word from the Dhurga language meaning 'bay of plenty' or 'plenty of fish'.

The White-bellied Sea Eagle is one of the many birds you can see around the park. This large white and grey eagle is the guardian of the Aboriginal people of Wreck Bay, and is represented in the park logo.

Booderee National Park has a magnificent natural setting with lots of beaches of birds and wildife. One of my missions was to find a kangaroo! 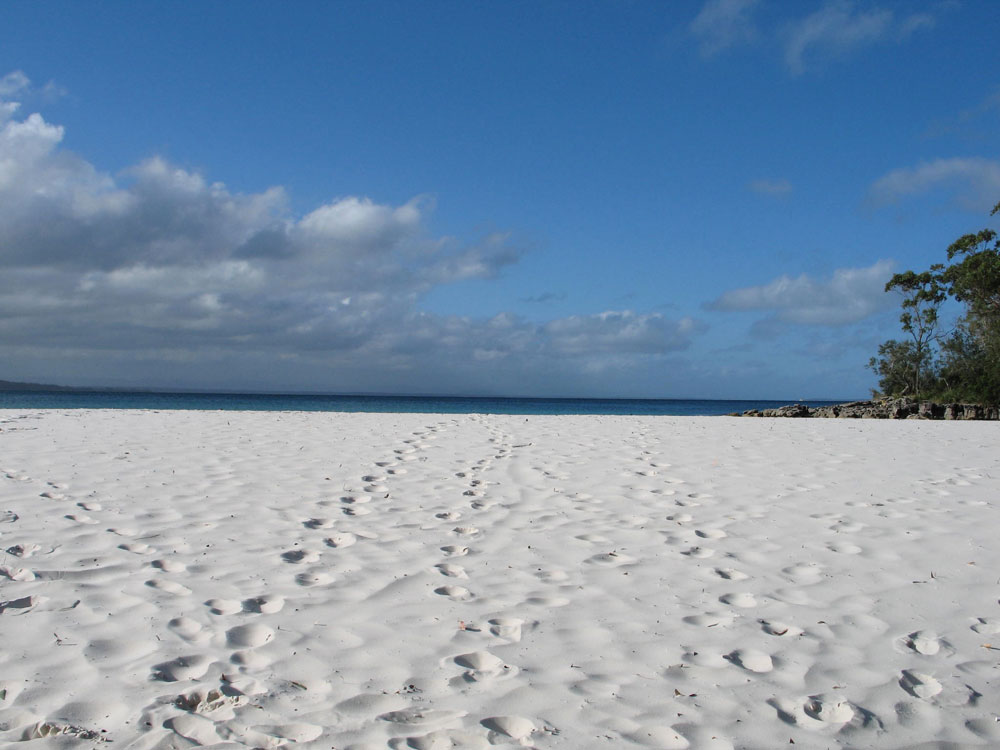 I really enjoyed Huskisson and it is a place I would like to visit again.

Brisbane is the capital and most populous city of the Australian state of Queensland, and is the third largest city in Australia, with a metropolitan population of 1.8 million. It is a city set close to the Pacific Ocean, and is situated beside the Brisbane River.

I stayed with fiends I met 30 years ago in Afganistan, Lynsey and Anna lena. It was as if time had not passed and we got on so well. It always helps if you have simular interests which we did. We went for a weekend to Springbrood National Park and we hiked 17 km through unspoiled rainforest. Spectacular waterfalls, lush rainforest, ancient trees, impressive views, exceptional ecological importance and natural beauty make this World Heritage-listed park an outstanding place to visit. 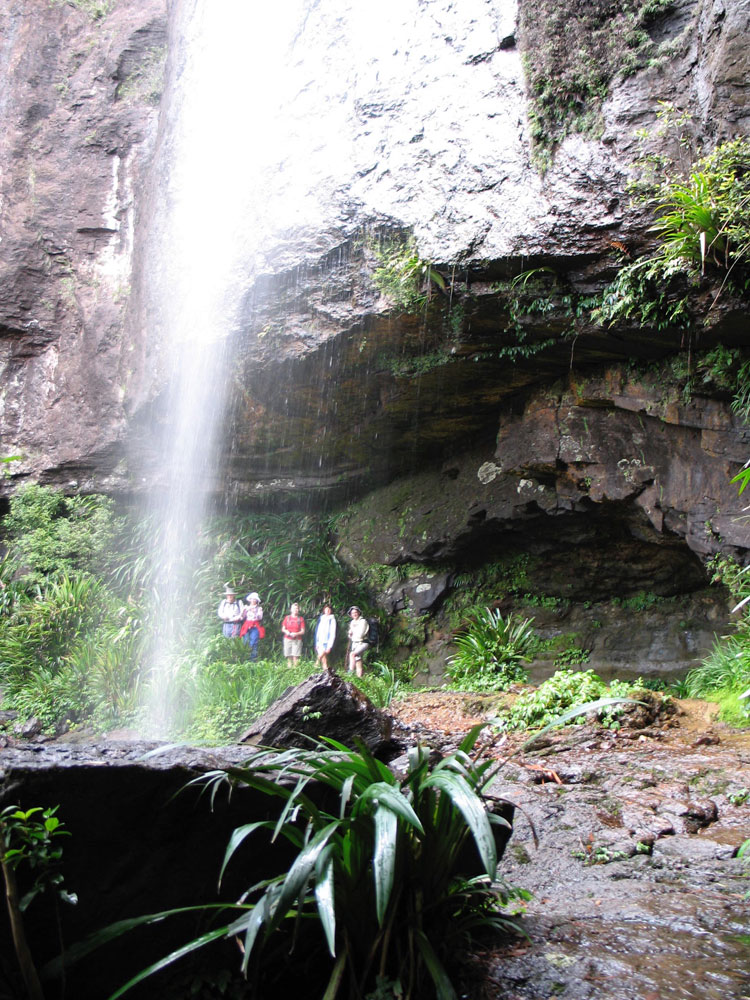 Plant collections at the Brisbane Botanic Gardens include a series of distinctly different gardens The recently developed Australian Plant Communities.It is well worth visiting, bring lots of water and plenthy of time!

We also visited Crystal Waters Permaculture Village - A community working toward balanced natural ecology. This will be the topic of my next article for seedmagazine.com

I spent 10 days in Tasmania which, in retrospect, wasn't quite long enough. It is still an unspoiled place with dense rain forests, jagged mountain peaks, alpine meadows and lakes, stunning coast lines, pristine beaches, farmlands, vineyards and a unique flora and fauna all of its own. Almost a third of the island is protected by national parks (there are 14 in all), and a little more than 20% of the total land mass has been declared a World Heritage area. 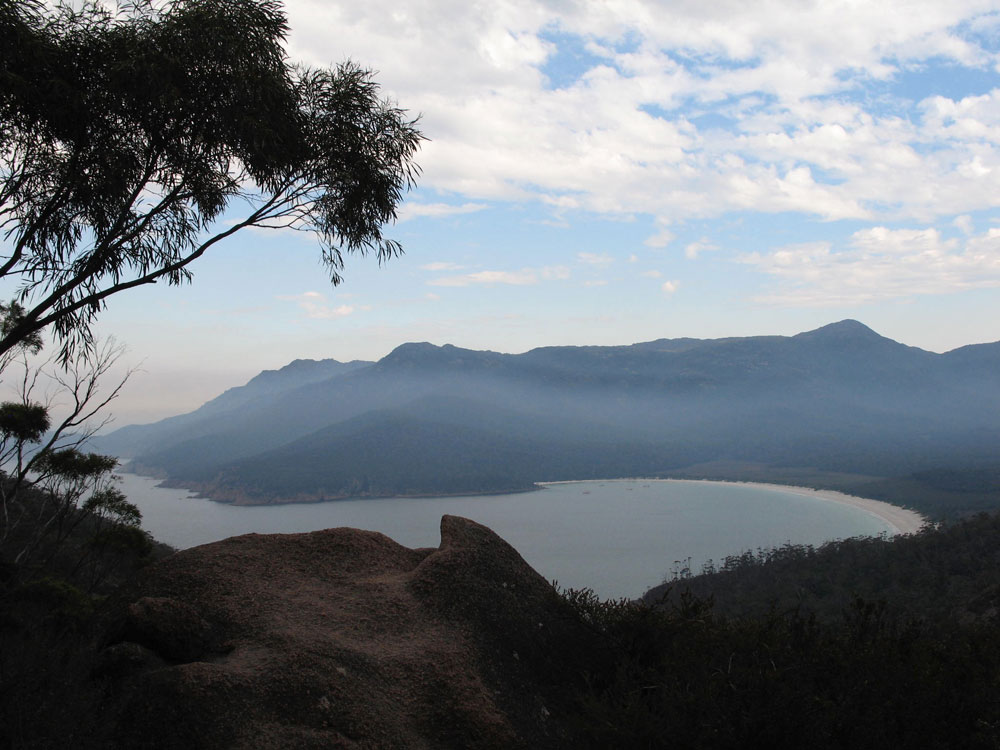 Tasmania is somewhat triangular-shaped, has a population of around 500,000, and is Australia's smallest state. It sits south-east of the mainland, separated by the 150 mile wide Bass Strait, and is bordered by the mighty Southern Ocean to the west and south, and the Tasman Sea to the east. The island's colorful history is nothing short of fascinating. Aborigines lived here for some 25,000 years before Abel Tasman, the first European, set foot on the island in 1642. Much later, in the early 1800's, the first British penal colonies were established which, in turn, provided cheap labor for a fast growing timber industry. The majestic Huon Pine, its dense wood highly favored for shipbuilding, was almost eradicated from the island. Few remain and are now protected. Sadly, it wasn't long before diseases introduced by the Europeans and brutal persecution took its toll among the native population and, by 1876, the last Aborigine had died.

The people are extremely friendly, ever so helpful, and always eager to engage in conversation.

I stayed in Sandy Bay, Hobart, Tasmania's capital city and the second oldest city in all of Australia (1804). It's a great place with magnificent views of the Bay. Hobart is a compact city and just about everything is within walking distance. It has a beautiful harbor front with beautiful wooden boats. 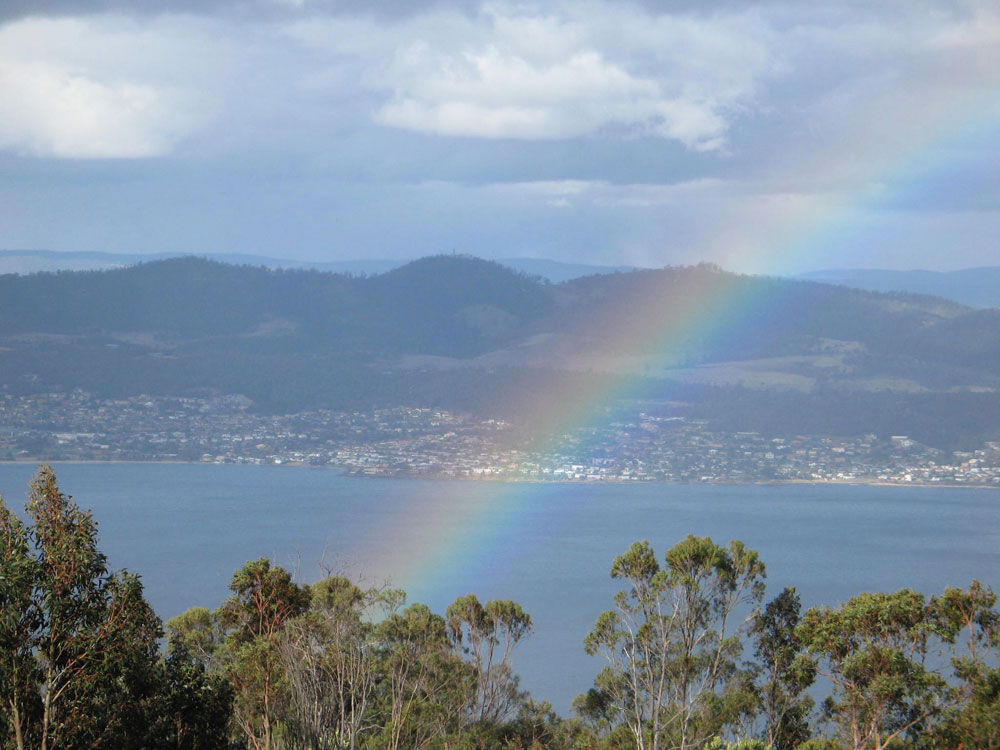 The Salamanca Place with lots of artsy shops and restaurants in a row of meticulously refurbished old sandstone warehouses has a great open air market on Saturday mornings. I met Ian Wallance, an inspiring landscape photographer and diver and bought his latest book for Alan and Karin.

I drove up to Mount Wellington which towers over the city with spectacular views. I sailed with Alan from Hobart to Oyster Bay.

Karin and Alan give me their car and I decided to go to Frechinet Peninsula recommended by several friends. Aussies roads are extremely narrow and winding. I stopped on seven miles beach and every beach alone the way, loving the views and pristine beaches. 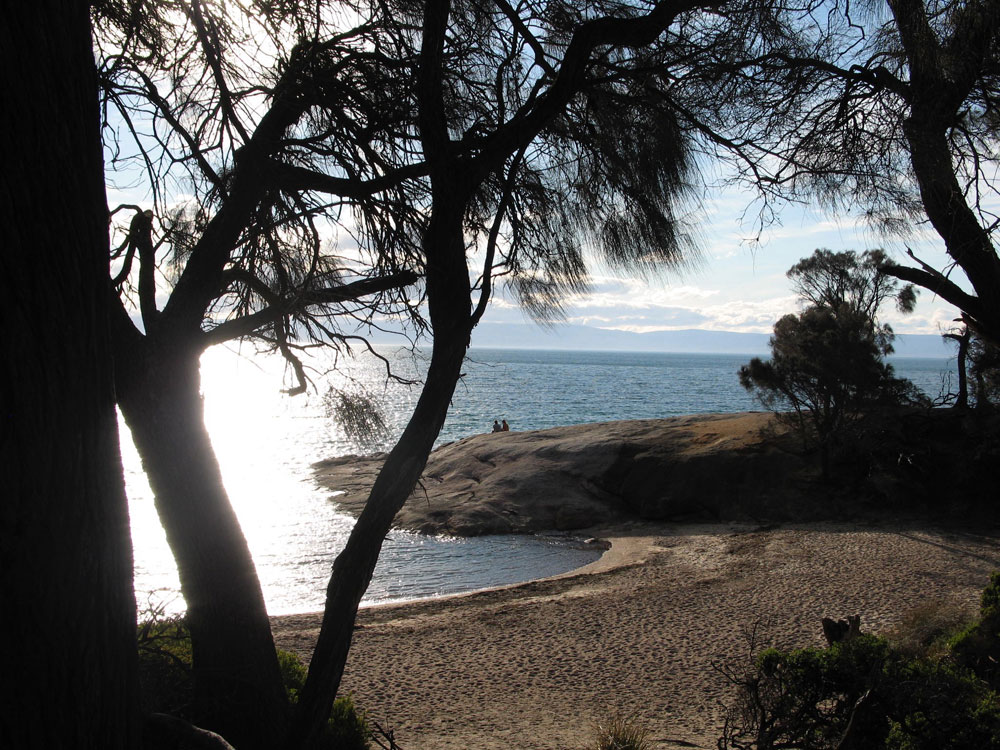 Almost always, the beaches were completely empty, often only with my own footprints and those of gulls, pelicans, pied oystercatchers and other sea birds. They are a pure nature lover's delight, peaceful and serene, unspoiled, wild, and exceptionally beautiful. 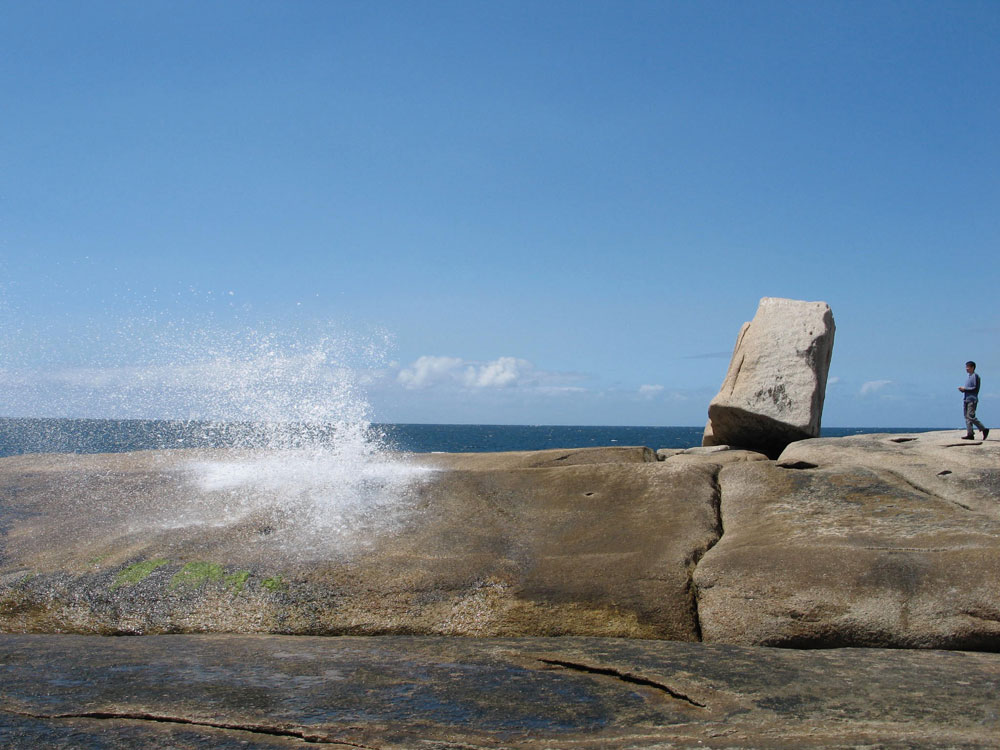 Freycinet National Park offers some of the most spectacular coastal scenery anywhere. Pink granite cliffs, gorgeous white sand beaches. I saw sea eagles soaring in the wind. I hiked out to the Wineglass Bay look-out with it's spectacular views of one of the world's 10 best beaches.

After Freycinet I drove up the coast to the small town of Bechino. I visited the blow hole and stay to watched the Fairy Penguins come ashore at dark. Although extremely shy, they make a good bit of noise and are easily identified once your eyes have adjusted to the darkness. Their burrows are along the shore where they raise their young.

In Bechino there's an unimposing shed that shows lots of fish and some of the most interesting sea creatures that live in the pristine waters of the Great Southern Ocean, well worth visiting! Bichen Sea aquarium.

Needless to say I that I really love Tasmania and I can not wait to get back!