The French love their food and if you travel though the French countryside you notice almost every house has a small garden plot.  They love their fresh, local, organic produce.  This is now a growing trend entering the mainstream – there is an expansion in the consciousness of the West.  If you watch any good cooking show all the top chefs use these kinds of ingredients.  Suzel Baraton and her mother Claudine Garré explain that this is how it always was in France though.  Suzel says she is inspired by permaculture (a natural, cyclical form of living and garden) but that it wasn’t hard to learn as she gardened in a similar way as a child.  She admits though that gardening isn’t her passion but that her mum has the true green thumb - which was honest as her mum spoke mostly French and she could have stolen the glory for herself!  Her passion is about using those products in her jams, chutney’s, dehydrated goodies and more.  If you go to the Farmers Markets you’ll see her there!    “We started with a garden with no trees, nothing!  Just rocks.”  You can see it’s definitely a labour of love and even though it’s very dry now there are still plenty of fruits and vegetables and everything is attended to in detail.  No chemical products are used, everything is done by hand and all the products they use in the house are ecologically sound.   That way the water isn’t harmful to the garden.  Pests are controlled by homemade Neem juice using the leaves of the tree.  When I ask about the Iguana’s who are the bane of any Bonairean gardener’s existence she says it isn’t a problem as they have two dogs.  One of them is new and staring at a fearless turtle who meanders right up to him.  “But the parrots…they are the worst!”  She has decided to make a pact with them.  If they leave some fruit alone then she leaves some of the harvest in the garden. 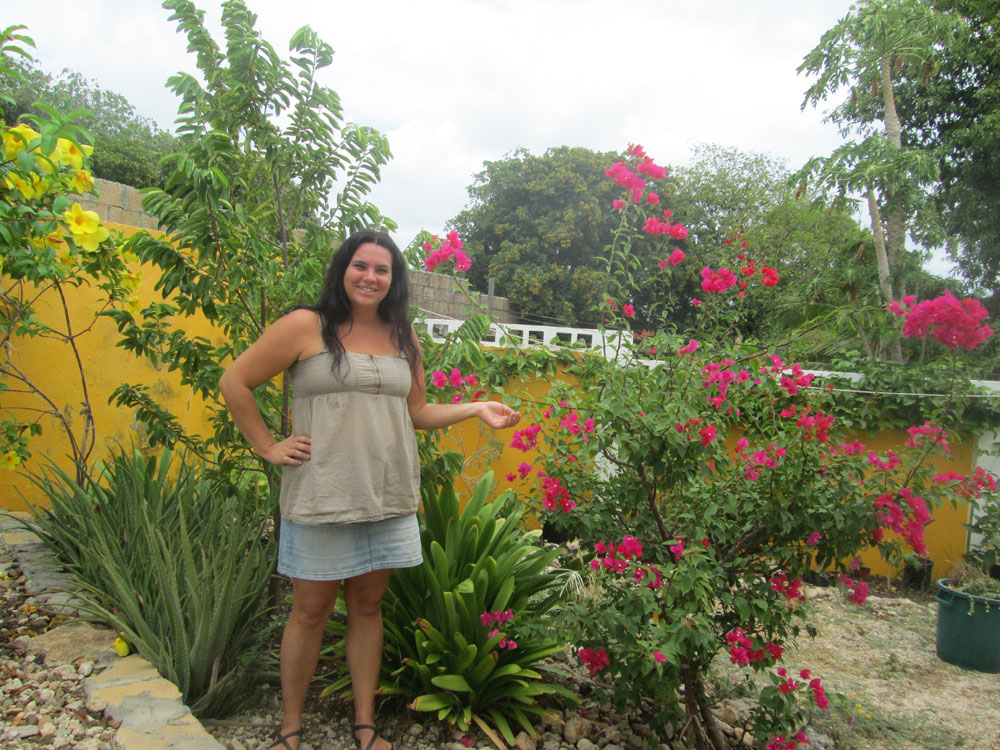 The garden has some very nice features:
•    Two compost bays.  One for kitchen scraps, eggshells and leaves and the other for grass and weeds.
•    A garden bed with plants in pots that have had their bottoms removed and are dug into the ground.  This retains water and prevents the nutrients in the pot from leaching so quickly.
•    Beds framed with drift wood (bamboo) or rocks.
•    Finally Suzel and Claudine’s secret (no longer!) - a system of watering using filled plastic bottles then placing them upside down into the ground for slow release

The plants in the garden are varied with all sorts of specialty plants from places like Guadeloupe where Claudine lived for some years.  They have a traditional herb patch with basil, mint, lemon balm and local oregano.  Interestingly Suzel makes a juice concentrate out of these and even makes a jelly out of the lemon balm.   Then there is a Malabar spinach living by a kitchen outlet that she dehydrates and makes into a powder because “my son doesn’t like Spinach…so of course I can hide the powder in his food!”   She also dehydrates Moringa leaves which can add nutrients and protein to many meals.   Also immediately noticeable are megalithic papayas everywhere full of fruits.  She keeps one hermaphrodite to pollinate the rest of the females.  She also allows everything to flower in the garden and leaves a bee’s nest in a nook because “without them we have nothing”.  Once you look down again there are lots of unique plants.  Apparently in France the evil giant Monsanto have won a court case to continue their practices but there is an underground French style revolution with heirloom seeds being sold and swapped through social media platforms for example.  Suzel has some of these seeds and has special types of tomato and white eggplant to name a few.  She reminisces about her purple eggplant tree that just died which produced 30 kilos of produce with every flowering!  Other unusual plants were breadfruit trees, mgambo tree (Majidea zanguebarica) which is used for decoration, necklaces and filtering water, dragon fruit, pigeon pea (Cajunus cajam), horned melon/kiwano (Cucumis metuliferus) and hidden humbly at the back of a border - dill!
All of the plants in the garden end up in the kitchen.  Suzel has a PHD in anthropology and philosophy “as an excuse to travel the world” but discovered a passion for cooking.  She found after doing an adult course in cuisine in France that working in kitchens was difficult as she didn’t handle authority well or high strung “diva chefs”.  “You’re not God, you’re just making an omelet!”  Now she has found pleasure in cooking at home in her own way.  And if she goes on a French strike she only has to answer to herself.   Her jams are cooked in copper pans handed down from her grandmother and all the ingredients are from her garden or friends gardens except for high quality organic cacao, rum, vanilla and cinnamon from Guadeloupe.  All the glass pots she uses are recycled so if you see her at the markets please bring some!

In the future she’d like to start a vegetarian/raw restaurant from home called Soul Kitchen which is registered now under “Le Petite Enterprise”.  What is your next jam I ask?  “Coconut and banana is next but I like to experiment with hundreds of varieties”.