Gardens on Bonaire tend to lean towards expanses of gravel and a sprinkle of palm trees.  The downside of this is that they provide little diversity to an island where many people live for its flora and fauna or at least enjoy it.  On top of this the gravel prices are now astronomically high and palms tend to use an abundance of water as they are generally thirsty.  The upshot is that palms require very little maintenance, have exquisite forms and provide us with the idea of being on a ‘tropical island’ island.  That can feel great with a cocktail in hand!  The Sabal palm is however the only native palm on this semi-arid island (a native plant being defined as plants that have developed, occur naturally, or have existed for many years in an area).  What are the alternatives that suit Bonaire’s climate I hear you say? 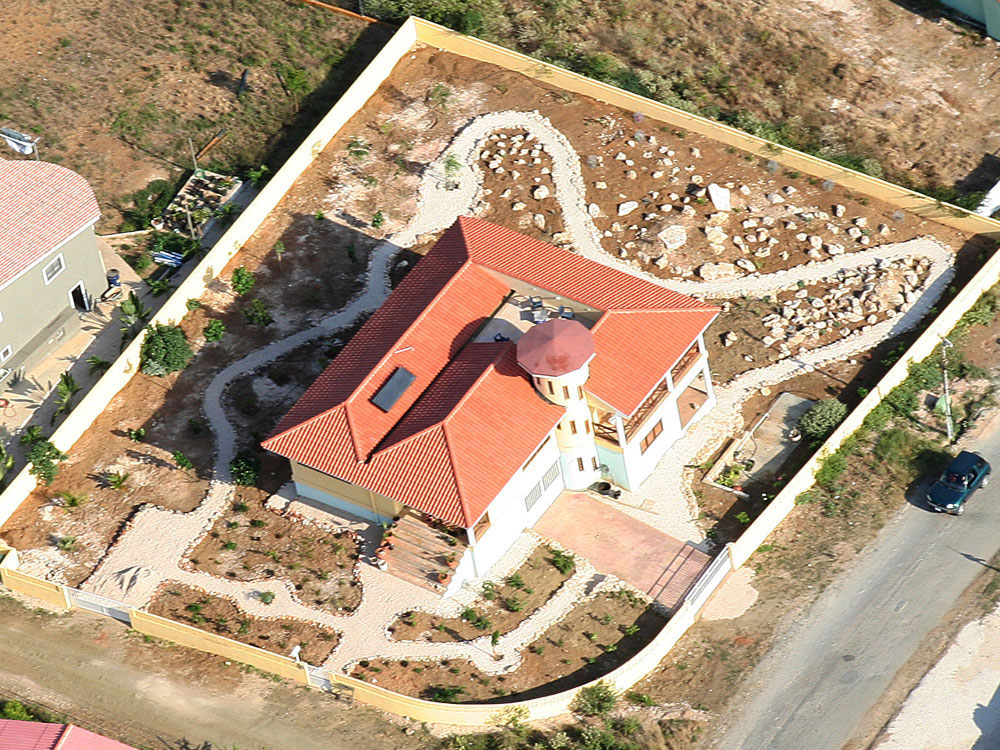 Enter Wietze Koopman and his unofficial native botanical garden.  He has been on Bonaire for 9 years since 2003 and when asked what he knew about gardening prior to Bonaire he replied, “Pretty much nothing.”  That is except sitting in them and enjoying them!  This may give some hope to those trying to experiment with their gardens.

Armed with a vague dislike of gravel and a huge barren plot of 1300 m2 Wietze developed his aims.  He wanted plants that could survive the climate using local trees that usually have a hard time here with the goats and donkeys.  Although it wouldn’t be ‘natural’ he wanted it to look ‘natural’.  In short – local trees, a path to walk on and resembling nature.  He then approached a few people for designs but eventually came to his close friend Marijke Wilhelmus for help.  She had many years of gardening and landscaping experience and they got together to make a plan.  This was later synthesized and drawn up by the author of this article.  The plan consisted of 3 separate areas and habitats – a huge succulent garden facing out to the ocean, a large forest of native trees and small orchard screening the neighbours, and a flowering shrub garden at the back.  These are all connected by a meandering path that only forks when it meets shade trees.  The plan was ready and Wietze went about implementing it with the help of friends: a gardener from Hawaii, a rasta from Jamaica and a Scottish/Dutch landscape architect (again the author) as well as his family.  This was a motley crew if you ever saw one.  With Wietze’s diligence and tenacity he marked out the property in square metres to exactly follow the design and followed all instructions to the last centimetre.  Literally.  Marijke requested 1 metre holes to be dug for each tree, he then proceeded to measure with a stick until every hole conformed!  There were of course obstacles such as the dumping of all the rocks in a single pile for the succulent garden.  This meant Wietze’s motley crew painstakingly moved each rock by hand to a new location and semi buried it to form that ‘natural’ look.  These measures were ‘one step beyond’ but provided that x factor.

Then it was time to plant – backfilling the holes with diabaas and cocos (local soil and ground coconut waste), planting local and semi local trees (Tamarind, Watakeli, Wayaka, Geiger Tree, Seagrape, Cedar, Indian Coral Tree, Mahogany, Bembom, Flamboyant, etc), and wildlife beneficial/colourful shrubs.  These plants were either donated by Marijke and friends or bought from GreenLabel, Captain Don, and LVV.  Finally the garden was finished!     Marijke advised Wietze against buying large plants as the holes were so deep and so much soil had been brought in meaning they would grow quickly.  Wietze waited impatiently, “I wanted them to grow.  I knew they had to root but I wanted them to be big from the start.”  The process was made worse when a friend stopped by on his moped to laugh at Wietze standing there watering his expansive rock garden in order to establish the tiny new plants, “What are you doing?!” Wietze replied, “Watering my rocks!”  His friend regularly reminds him of this since.

Three and half years later Wietze is the one laughing, “It’s incredible.”  And it really is amazing.  I have never seen a garden grow so quickly or lush on Bonaire.  Now you could very well be on a tropical island!  But it’s using native trees, succulents and a variety of shrubs.  This resulted in a garden that only required irrigation for the first year and now only once a week in the dry season.  And what does Wietze say to the doubters who use gravel against weeds, “Nonsense, I do 5 hours every 3 months in the dry season and once a month in the wet season.”

Now Wietze sits having breakfast watching the Ruby Topaz and Emerald Hummingbirds, Sugar Thieves, Bare Eyed Pigeons, Common Ground Doves, Grassquits, Paraqueets, and Lora’s that visit his garden.  Then because of his rock garden all the reptiles that need to regulate their body temperature are there.  He even spotted the only snake on Bonaire, the Bonairean Blind Snake, which is tiny like a worm!

Now Wietze knows almost all the plants in his garden and is working on learning the succulents, which are harder to identify.  Having such a beautiful garden has seeded some green fingers after all!  I asked him if he had any regrets: “Not planting enough fruit trees or leaving space to grow vegetables.”

Finally I asked him what his favourite tree was: “Moringa, which is only semi local but it’s incredibly fast growing and you can eat all parts of it.  You can eat the seed pods, flowers, leaves and roots.  But I didn’t try the roots yet!  The Lora’s love it too!"