There is a little treasure hidden off Kaminda Lagun.  Take a left when you hit the Balentina Blokkenfabriek sign, follow some bumpy dirt roads and you’ll find Edshel’s place marked by a sign decorated with a sun and moon and the text “Mantene Nos Cultura Na Bida”.   Here is a typical kunuku from the outside but upon entering you see the workings of an avid gardener.  Edshel, a kind and humble green thumb, used to make a living from his plants but now it’s become a hobby which he continues despite the rising cost.  “If you have lots of plants and they cost a lot of water, no money comes in.”  He’s also battling the extremely dry year which he says has been one of the worst and is being besieged by those pesky iguana’s, “When I’m out, they come and visit me!

In the past, school children would visit Edshel’s garden and he would talk about traditional food cultivation.  He was born in Curacao near the famous gardener and herbalist Deenah Veeris.  In his childhood he was raised to honour the garden and described what he learnt as a necessity because in his time there were no doctors in the area.  “When you got a cold you had to go to the garden.”  Every year as he grew up they had to plant the kunuku. 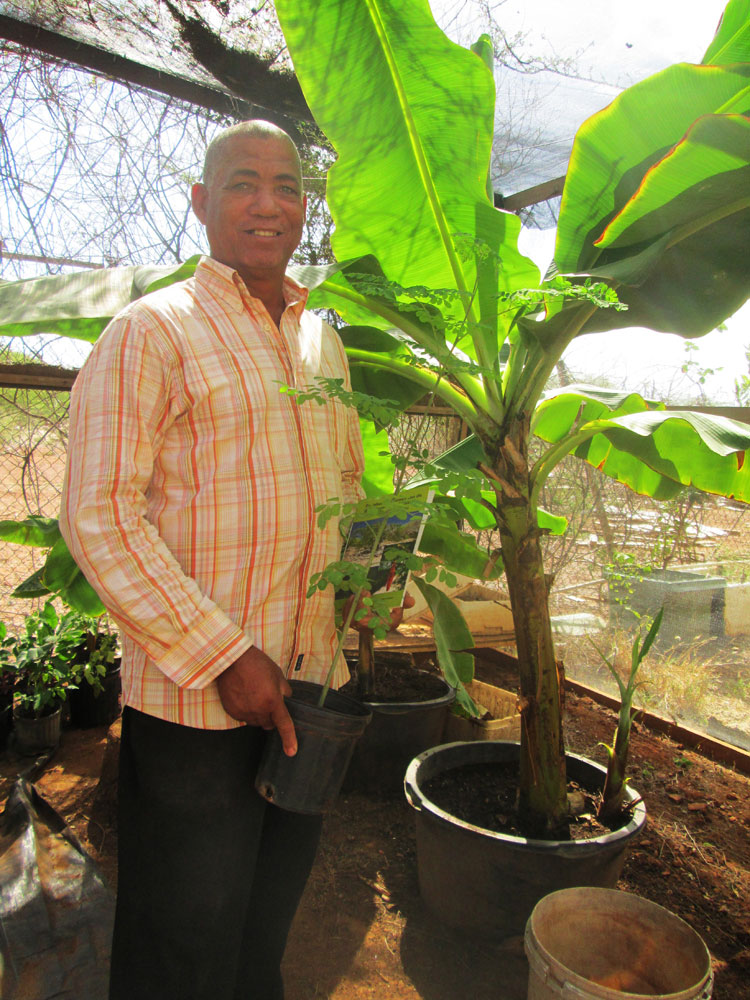 Inside the first open shade houses the majority of plants are still looking vibrant.  You can tell he’s out and about often by the quality of the plants.  He shares, “Every morning I HAVE to be out with the plants.  I don’t miss a single day.”   There is quite a variety here and many native plants.   Everything from Palu di Sia, Taki (you can boil and eat the insides including the seed), Beshi, Kibrahacha (you have to harvest seeds after flowering as they don’t grow seedlings beneath the mother tree), Kalabas, Oliba, Wayaka, Tamarind, Mahogany and Shimaruku.  We get lost in the finer points discussing the difference between the three types of Palu di Sia, the most well known of which has that trademark orange/brown peeling bark.  He patiently explains that there is Bursera simaruba (orange/brown bark), Bursera bonariensis (similar glossy leaves to B.simaruba but silver/white bark) and Bursera tomentosa (similar silver/white bark to B. bonariensis but unusually shaped hairy leaves).   The next time you look at a species of Palu di Sia you’ll be able to impress your friends a little more then “well, it’s a tree with really nice bark”!   Amongst the trees were also the native Sabal Palm which I have mentioned before as the only native palm on Bonaire.  Edshel went on to remind me that it is also a PROTECTED palm and that if you “bulldoze one you should go to jail!”  Also in the nursery there are fruit trees for anybody’s fancy from soursop, pomegranite, mispel, kenepa, mandarin and suriname cherry.

When I asked how Edshel keeps the leaves of plants looking so vibrant he replied that he mashes the green insides of a kalabas with water and pours that over the plants.  As for nutrients he adds one quarter goats manure to three quarters local soil when potting.  For fertliser later on he will buy organic liquid fertiliser from Manuel who is sometimes at the Kriabon Farmers Market.  When he plants seed he buys potground from Kooiman as the local soil often contains grass seeds.  Another trick he uses is a bucket filled with holes that he fills with water.  This acts as a slow release system.  There are also some cases of recycling such as his innovative use of bathtubs as planters! 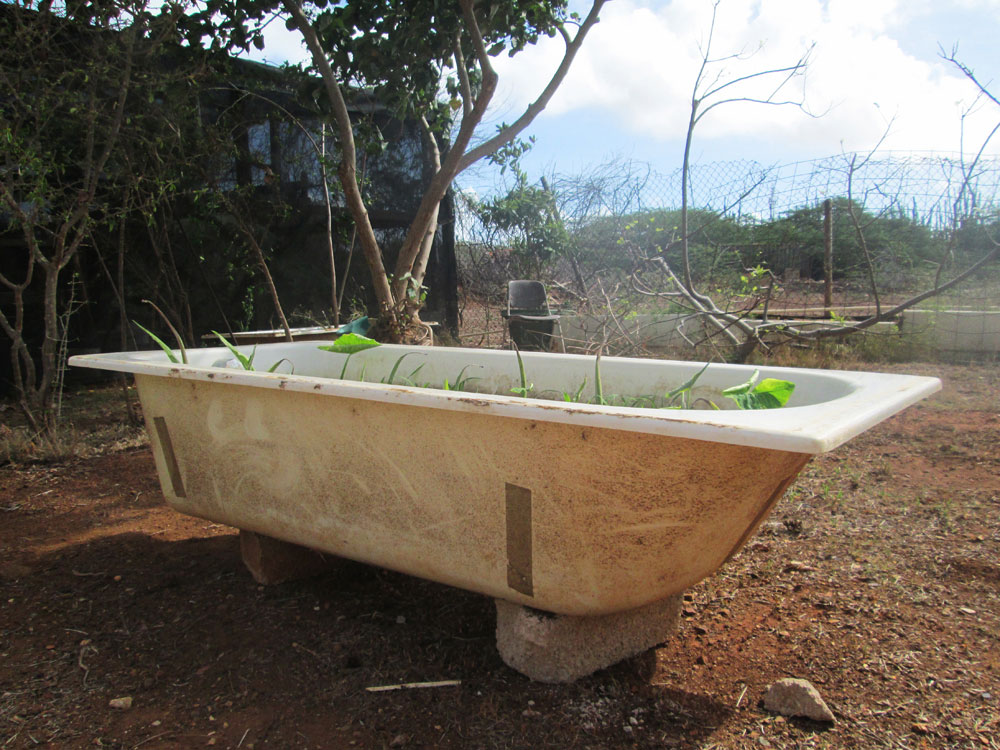 Further into his kunuku Edshel has full shadehouses.  Here, safe from the meddling iguanas, he keeps his tender sprouts and his seedling station.  In this area he is sprouting mint, starfruit, potato, parsley, celery, garlic, Italian basil, kouseband and “popeye” spinach as he calls it!  “This is the time to plant seeds, right before the rain.”  In the other rooms he has banana, moringa, rosemary (grown from seed which I had previously heard was impossible), yucca (the sweeter variety the locals call “yellow”), custard apple, pineapple, papaya, cucumber and oxalis.  The last apparently can be used against spots and you can eat the leaves, flowers and carrot-like roots.

On the way out I notice a large tree I had never seen before.  When I ask what it is he smiles mischievously and asks how I think he got it.  I don’t figure it out and he laughs because he found the seed deposited by the sea! He says people tell him stories like, “Ooooh I saw that tree at Noord Salina or ooooh I saw that tree at Hotel Bonaire” and he knows it is not true.  It turns out to be a Ficus with rubbery leaves a little smaller then F. elastica.  He has only seen it on a visit to Jamaica where he saw a huge specimen.

As a final parting nugget of information he lets me know that when he plants a coconut he will add sand and seaweed from Lagun.  And judging by his massive coconuts that he’s clearing out for a bargain $150 a piece it’s working a treat.