“I was always fantasizing about having a piece of land myself which I would protect. There I would leave nature alone and try to live off the land, preferably somewhere in a lush bush with waterfalls and mountains. Somehow I ended up on Bonaire, an island with a semi desert climate…!”

Living on a barren kunuku with no electricity, no fridge, no running water with some oil lamps for company it wasn’t always an easy ride for Hans Voerman.  He said, “I was almost camping” and with no toilet either, he really was!   This was the humble start of Auriga Ecolodge Bonaire.  He came to Bonaire in 1990 to visit his dive sergeant from the Engineering Corps where he was previously enlisted.  He was travelling after being unsure of what to do next.  After arriving on Curacao and spending 30 minutes there he left swiftly to Bonaire where, “Well the usual story you hear…I fell in love.  It used to be very quiet and relaxed. “  There were, “Few Dutch!” he laughs.  “And the Dutch that were there had interesting stories to tell!”  He began as a Dive Instructor and moved to and from Bonaire until 10 years ago when upon returning started Outdoor Bonaire (www.outdoorbonaire.com). With Outdoor Bonaire, he could do everything he did as a hobby: mangrove kayaking, cave tours, climbing, rapelling, hiking, island/park tours. 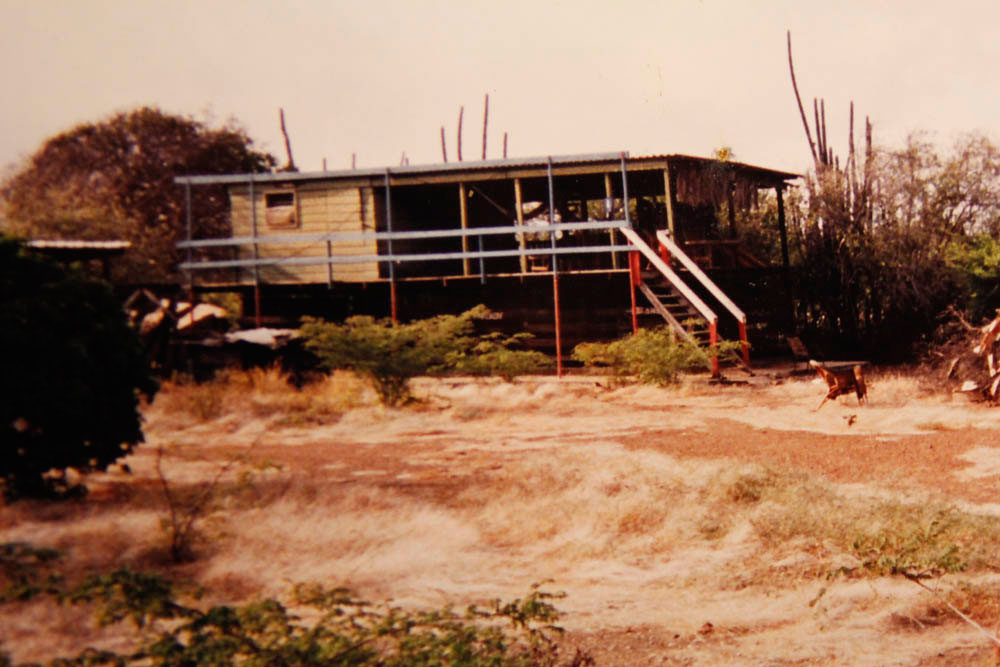 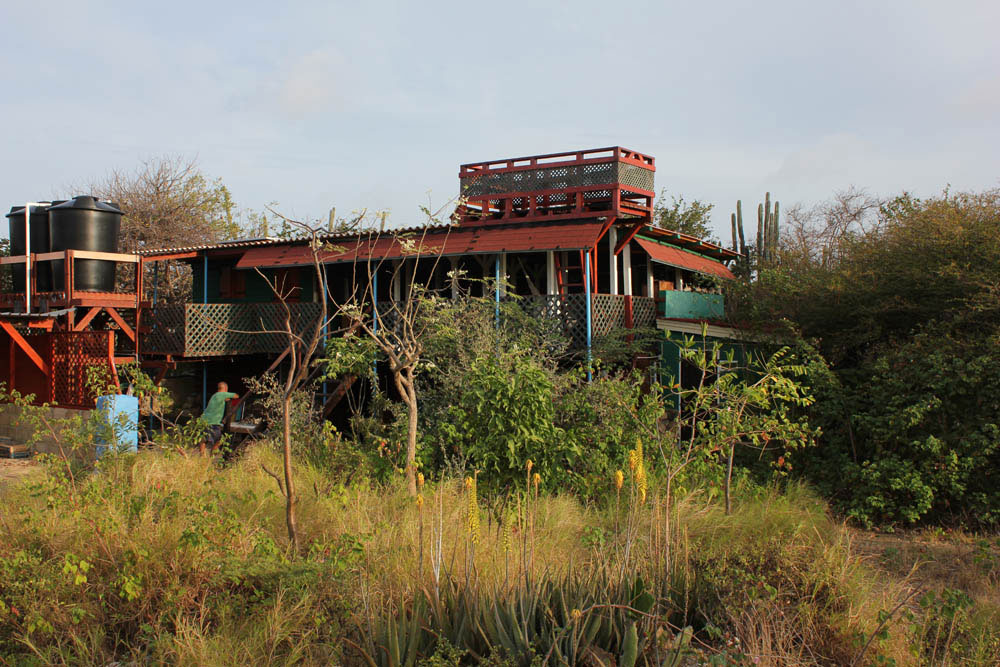 A few years later he had the opportunity to buy the land he lived on at the time.  He had a hard time visualizing this barren plot being anything like his dream of waterfalls and virgin land but he got working on the fence to keep out the grazing four legged kliko’s (the green bins provided on Bonaire by Selibon).  It was quite an undertaking with a property of 13,500m2.

The existing fences provided a framework for 3 distinct areas.  Half would be left undisturbed and rarely walked on.  A quarter would be replanted with local trees for birds and people.  Examples such as Tamarind or Taki serve both.  The Taki fruit birds love, humans can cook and the tree is evergreen with no thorns.  The other local trees: Watakeli, Kirbrahacha, Palu Di Sia, Oliba, Kalbas, Apeldam, Stoki (which flowers at night and attracts bats), Wayaka, Dividivi, Palu Di Santu and more.

It is quite remarkable to see the effect of fencing and conservation on Bonaire.  In this Serengeti type landscape you can start to imagine what Bonaire may have looked like.  Sometimes I expected a Giraffe to pass me by!

The last quarter around the cluster of structures is more for human use and not necessarily local (but of course the birds are welcome): Oba, Moringa, Kenepa, Soursop, Pomegranite, Guava, Banana and self seeding trees like the Shimaruku which grow where they like.  In this area he has also built a chicken pen and a greenhouse.  He has been experimenting there and noticing the local/suriname vegetables work best: local spinach, tajerblad (taro), sweet potatoes and kouseband (type of long bean).  He says, “It’s hard to make it worthwhile but I keep trying.”  Also in there is his Sabal Palm project where he is growing seedlings.    In a new bed is also the result of a 6 month debate we had previously: who had the real Senna alata (also known as Balor Di Yonkuman or Candlebush).  This wild shrub has showy flowers that protrude like yellow candles above its pinnate leaves that occur rapidly after rainfall.   The crushed leaves were used against all sorts of skin diseases including ringworm.  We were both growing what we thought was Senna alata at the same time but unfortunately they looked completely different. Hans wanted to know who was right and planted both next to each other.  As it turned out, my seedling was the true Senna alata, and I received a Duvel beer (obviously it all got heated towards the end and we shook on a beer as wager).  He also threw in 3 delicious fresh eggs! 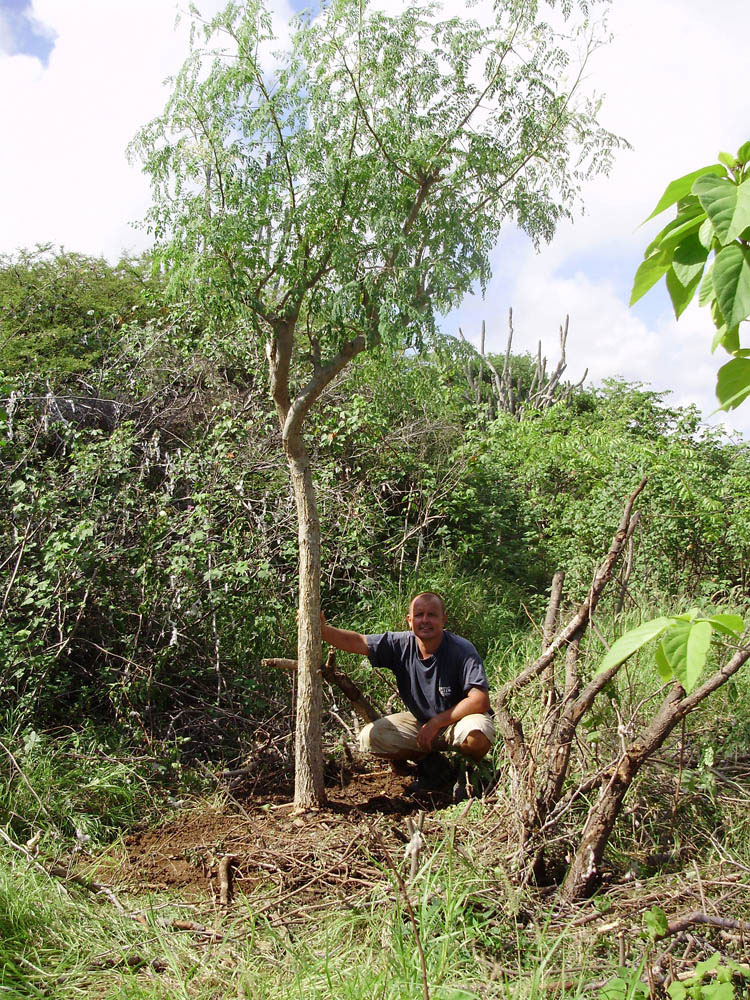 Hans is now looking into food sources for his animals such as Almond Trees, Moringa and Negrita di Malpais  (Acacia glauca which is not for pigs however).   On a side note the Negrita di Malpais is a nitrogen fixer (benefits soil by fixing nitrogen into its roots), quick growing and provides shade.   He is also looking at the possibilities of staple crops such as corn.

Also within this quarter of land is Hans’ labour of love: the ecolodge (www.ecolodgebonaire.com).  A beautifully renovated horse stable, running on solar energy, gravity fed water and as much recycling as possible.  For every booking he plants a local tree in his replanting sector.  Usually a large, established tree from GreenLabel or one from Edsel Martha (near LVV).

As you sit on the star gazing tower you feel a sense of peace, watching parrots fly eyelevel and it’s apparent that maybe he didn’t find his waterfall, but he did guard nature and it made him a paradise in return.  And this is only just the beginning…