Snorkeling in Bonaire is wonderful; the sea is full of fascinating marine creatures. One glorious afternoon my son Clark and I went snorkeling near our house. Luckily we brought our underwater camera and we spotted this amazing, interesting looking Jellyfish. That same evening I emailed one of the pictures to our local biologist. He said that is was the very rare and highly toxic Bonaire Banded Box Jelly (Tamoya ohboya - read more about the funny story behind this name) and the 36th documented Bonaire Banded Box Jelly since 2001 and a new species!  Experts think Tamoya ohboya is only to be found in Bonaire waters.  Find it mentioned in "What on Earth?: 100 of Our Planet's Most Amazing New Species" with a credited picture from me.

The jellyfish is a strange and fascinating marine animal that is found in all the oceans of the world from the waters surface all the way down to the deep sea. They are one of the oldest living beings and more than 650 million years in existence.

What makes it fascinating is the fact that it does not have a solid skeletal structure, or a brain, or a heart. 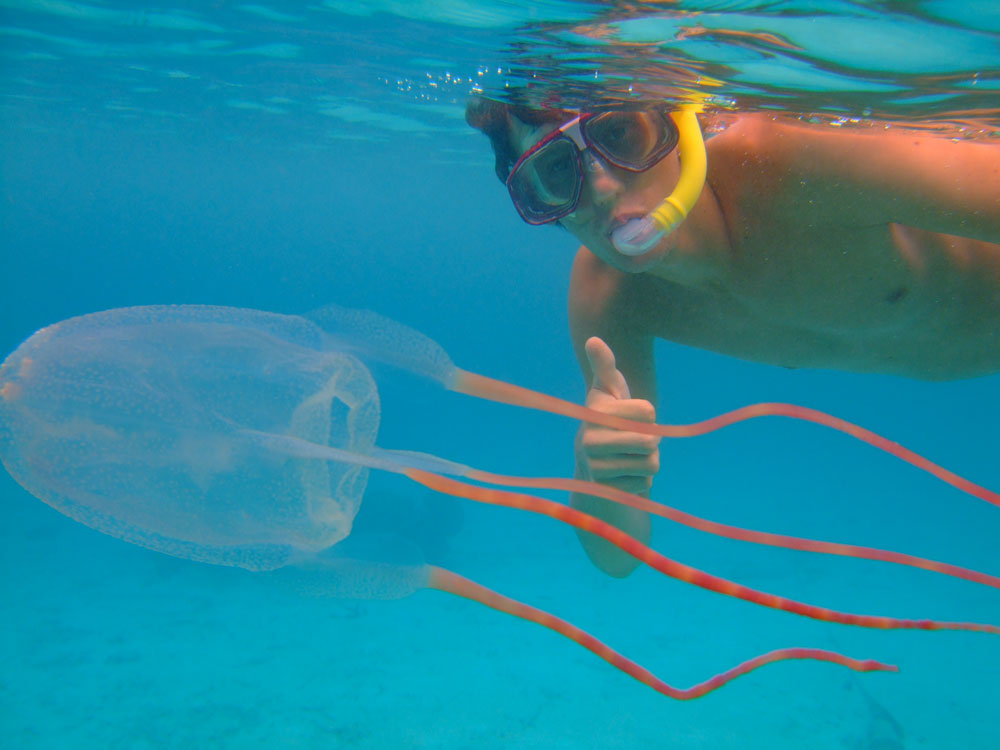 Guess how many eyes a Bonaire Banded Box Jelly has….

Each jellyfish has six eyes, if you can believe that! Two of them actually have lenses, pupils, and retinas, whereas the remaining four are just light sensitive. The eye is also a balance organ, telling the jellyfish which way is up.

They are made of 95% of water. This is the reason they can't navigate well through water and have to depend on the water currents and tides for easy transport, and also to get them closer to their food.

What do Jellyfish eat?

Most jellyfish are passive drifters that feed on small fish, eggs and plankton that become caught in their tentacles. The stomach is the only opening in its body and the food is digested there and the waste also comes out from there.

Jellyfish have stinging cells. Whenever a prey comes in contact with a tentacle, hundreds to thousands of stinging cells fire a type of "hook and line" into the prey's direction. These stinging cells are able to latch onto the prey and the tentacles bring the prey item into their large "mouth" for digestion.

And what eats Jellyfish?

Jellyfish are eaten mostly by a couple of other fish, crabs and loggerhead turtles. People in China and Japan like to eat the mushroom jellyfish.

How big does a Jellyfish get?

In the Caribbean there are some jellyfish, which come as small the nail of a finger. On the other end of the scale the Arctic Lions' Mane jellyfish has a bell of up to 2.5 metres and tentacles, which can reach up to 60 metres. This gigantic jellyfish is thought to weigh over two hundred and fifty kilograms. 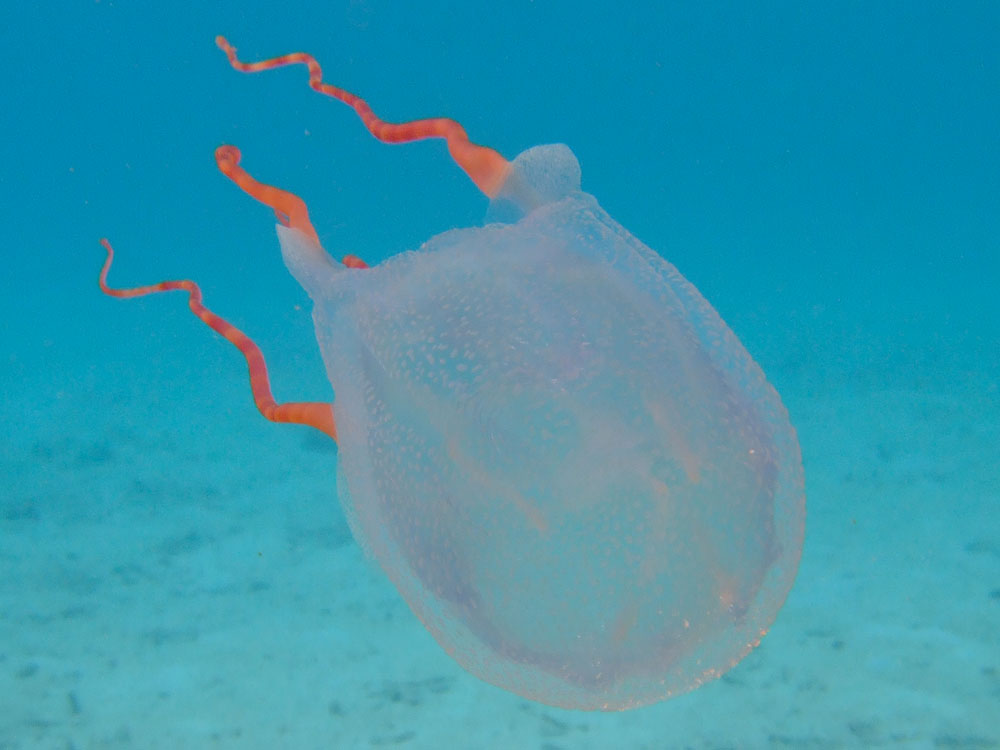 Why are there more jellyfish now?

In more recent times there has been a dramatic rise in jellyfish numbers. Overpopulation of Jellyfish is being caused by over-fishing, global warming, and also an excess in the levels of nutrients in the water due to sewage and fertilizers.

More recent jellyfish blooms show that the jellyfish population incline is becoming more and more severe and frequent. With such large numbers of jellyfish in the waters there will certainly be a very dramatic impact on fishing and food supplies. The more jellyfish that are in the sea, the more they will eat, and the less food there is for the other marine creatures which share their dietary interests. Another problem is for swimmers, with so many jellyfish in the water it may very well become almost impossible to go for a swim.

Did you know that discovering new species relies on:

Jellyfish do not communicate like we do; they do not have a brain or language but some can flash colourful lights. Scientists think these may be used to disguise them or even to attract prey. Jellyfish can signal each other. One jellyfish releases chemicals when it is about to breed. Other jellyfish then are stimulated to spawn at the same time, so that the most jellyfish are born.

This is a very rare and highly toxic Bonaire Banded Box Jelly and the 36th documented CBBJ since 2001!