Slave Huts - The Dark Past of Bonaire's Salt Industry

Bonaire lacked many of the natural resources which made the other Caribbean islands prosperous. It did, however, have an abundance of one natural resource, salt! An integral ingredient for preserving meat and fish before the advent of refrigeration. In the late 1620s tensions between Spain and Netherlands increased which led to the Spanish cutting off the supply of salt to the Dutch. A few years later in 1633 the Dutch captured Bonaire, Curacao and Aruba and gained valuable control of Bonaire’s salt pans. The largest island, Curacao, became the centre of the notorious slave trade and Bonaire a plantation island for the Dutch West Indies Company. 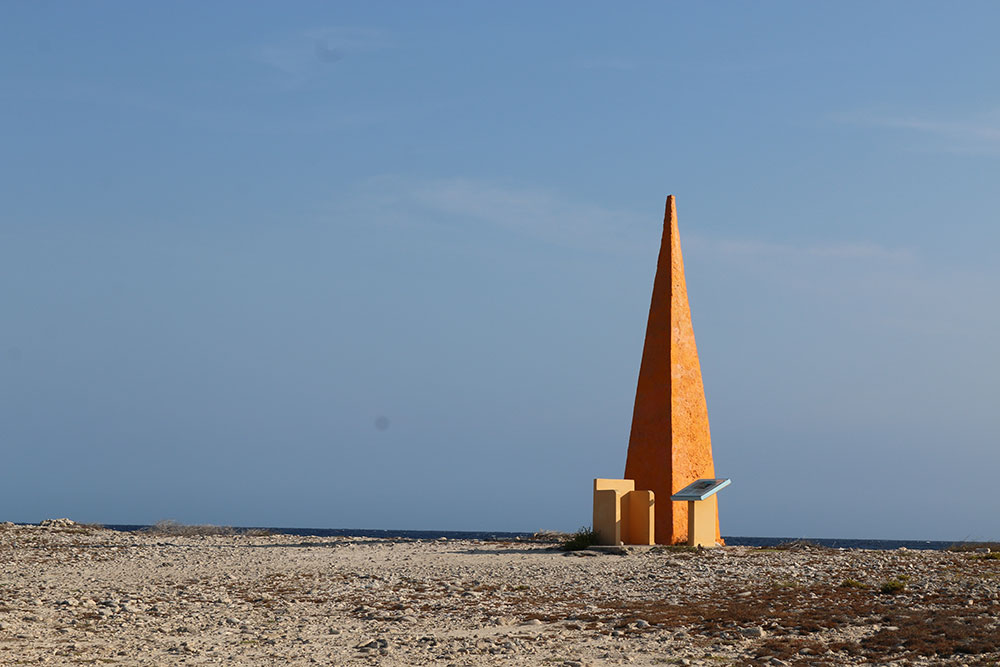 During the two decades that followed Bonaire changed hands between Colonial powers several times and was returned to Dutch ownership through the treaty of Paris in 1816. By 1837 Bonaire was a thriving centre for salt production. There were four pans each producing a different grade of salt, originally they lit smoky fires on top of mounds of corals to guide the ships to the correct loading site. Later the Dutch government built four obelisks, each a different color red, white, blue and orange. These were the colors of the Dutch flag and the Royal House of Orange. These were constructed near the salt lakes as a means of showing the ships where to land to fetch the grade of salt they were purchasing.

In 1850 (13 years before slavery was abolished), the Dutch West Indies Company built the slave huts we see today on EEG Boulevard. They were small coral stone houses only 1.5m high, with sadly no windows and doors and were designed to house 2 persons and store the personal belongings of the working teams. We can still see the white slave houses near the white salt pan and the ocher yellow houses near the red salt pan. 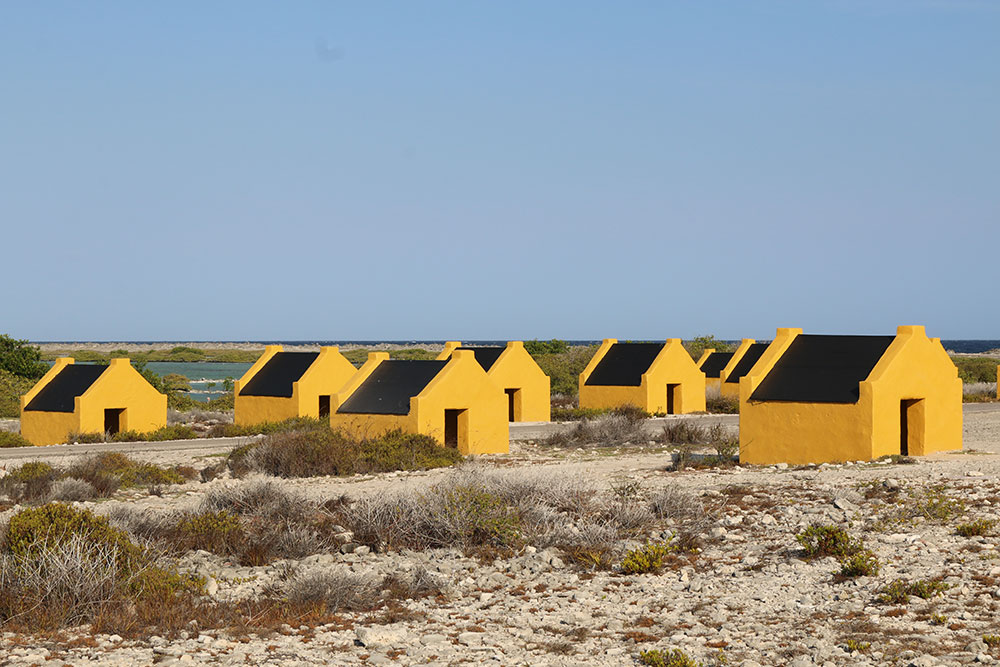 You can also see a larger house next to the white slave huts, this house was for what was termed the “Bomba” whom was the overseer 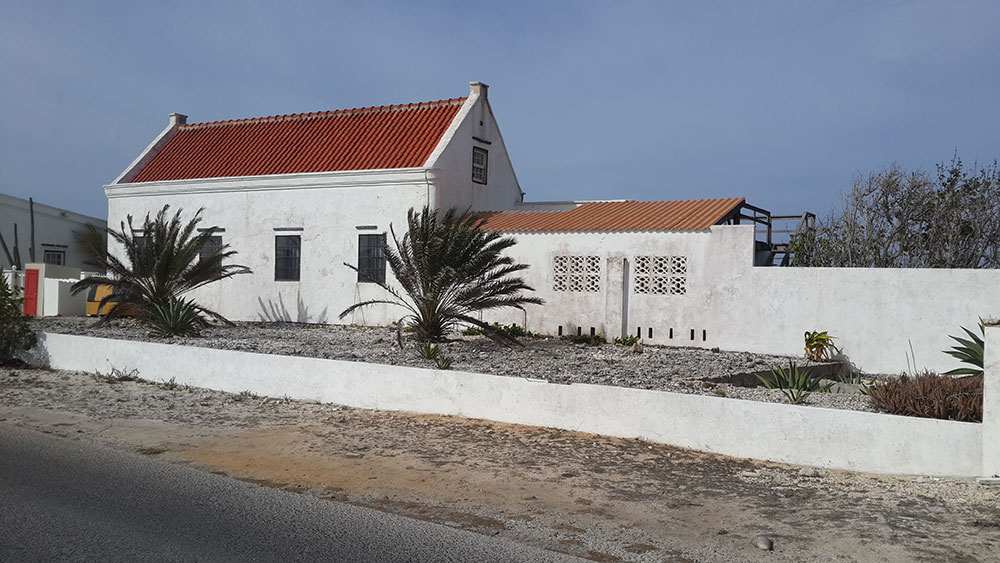 The slave’s families would reside in Rincon, in the interior of the island. The slaves would walk back to Rincon (A seven hour walk) on Friday afternoons to weekend with their families, returning on Sundays. The work in the salt pans was unfortunately very heavy work, it required an estimate of 500 slaves and was only done during the dry period in Bonaire. The slaves had to chop salt from the salt pans with pickaxes, shovels and wheelbarrows.

The hot tropical sun created very difficult conditions and very sadly slaves worked with bare feet and hands in the biting salt basin and were often blinded by the reflection of the sun on the salt crystals. The salt was placed into baskets and transported on the heads of slaves which was carried to small boats on the coast. The small boats in turn would take the shipment to the larger salt ships of the West Indies Company which hailed from Curacao and sailed to the Netherlands after acquiring the load. 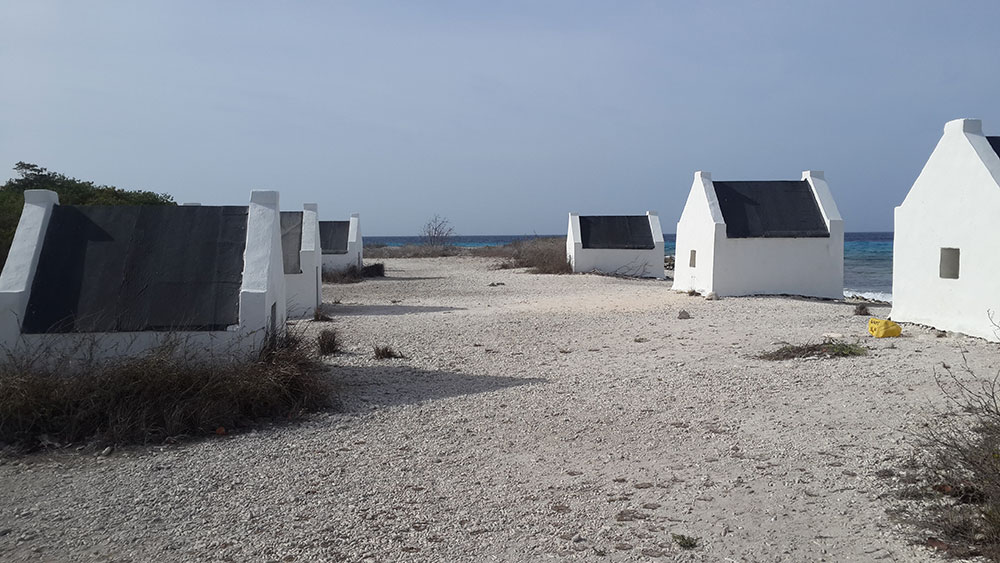 The slave huts have been maintained and kept in their original state with just the traditional thatched roofs replaced with a more durable marine plywood. Information boards have been placed at the locations with an explanation of the history of salt extraction and the unfortunate history of slavery tied to it. The Bonarian authorities have set forth to maintain these crucial pieces of history for future generations.

Information presented on the signboards located by the slave huts, will give you more information and interesting stories about this history of these monuments. A small teaser from one of these stories “Man pa makutu di Maria”, can be read below.

“Captains on the Salt exporting ships would often tell of the beauty of Bonaire, with the colorful salt ponds, blazing sunsets with pink flying flamingos and singing women who looked like mermaids carrying the salt for ships anchored at shore”

If you would like to read more about this story and see the Slave Huts first hand, you can rent a car and drive down to the southern part of EEG boulevard to see this important part of Bonaire’s preserved history. 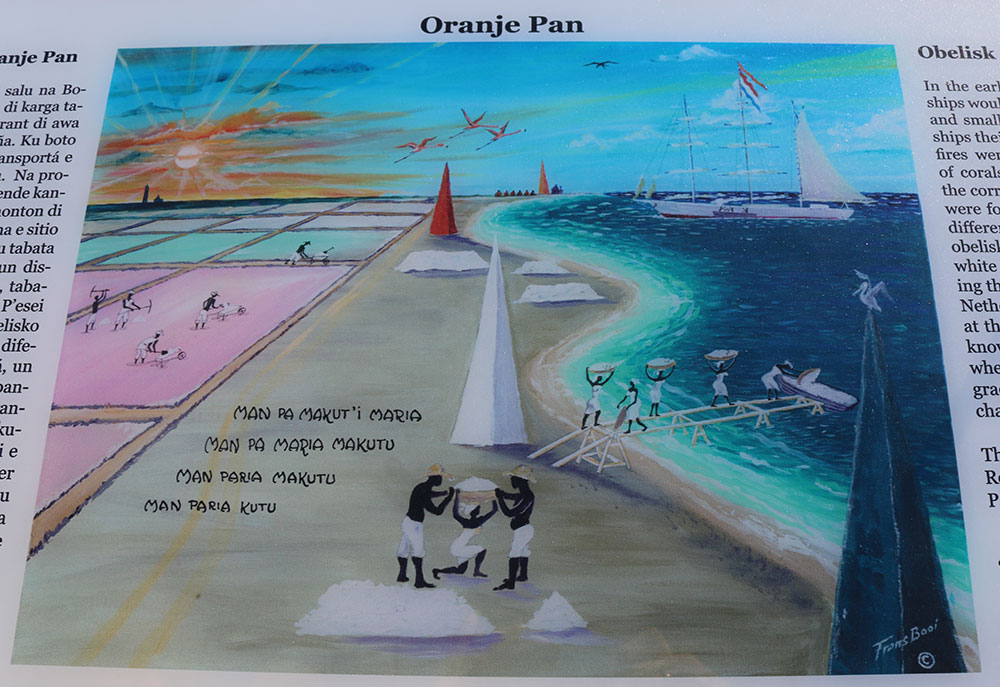